Symptoms of the disease

Wilson’s disease is a rare disease characterized by excessive accumulation of copper in the body, especially in the liver and brain. Exceptionally for a genetic disease, effective medical treatment is available if it is is instituted early and continued throughout life.

In all people with Wilson’s disease, copper buildup begins in the liver.

Liver symptoms can be of very variable severity ; it can remain silent for a long time, manifest itself gradually or brutally.

Liver involvement may be similar to viral hepatitis: severe fatigue, loss of appetite, elevated liver enzymes called transaminases (ASAT and ALAT). Sometimes this is manifested by jaundice (jaundice with a yellow color of the skin, white eyes) associated with swelling of the belly due to fluid accumulation (ascites), and/or swelling of the ankles (edema lower limbs).

When the liver is severely damaged and its functioning highly impaired, it is called liver failure, which can be dangerous for the life of the patient.

Finally, liver damage can progress to severe chronic liver disease. This corresponds to the progressive transformation of the liver into a « hard » organ composed of fibrous « scar » tissue. This liver disease is sometimes accompanied by an increase in spleen volume and dilation of the esophageal veins (oesophageal varices).

Examinations that diagnose liver damage are:

Neurological symptoms vary according to the damaged areas of the brain. It is in order of frequency of:

It is important to know that patients with neurological symptoms always have liver damage.

Neurological symptoms worsen in the absence of treatment.

Under treatment, the improvement is slow, appearing only after several months. In addition, when initiating treatment, a worsening of symptoms can be observed but that is most often reversible.

The evaluation of tremor or distal stiffness can be performed by writing tests such as the DPRE (Flow Rate Precision Rhythmicity Analog Visual Scale ; T. Peron-Magnan). This test is used to measure the feeling of the patient when writing. Write as quickly as possible for a minute the sentence « je respire le doux parfum des fleurs », draw the inside of spirals and finally slalom between points under the same conditions:

In addition to the neurologist’s examination, the reference examination is brain MRI, which can be used to visualize the brain lesions testifying to the cerebral accumulation of copper; this is most often abnormal in patients with neurological signs. 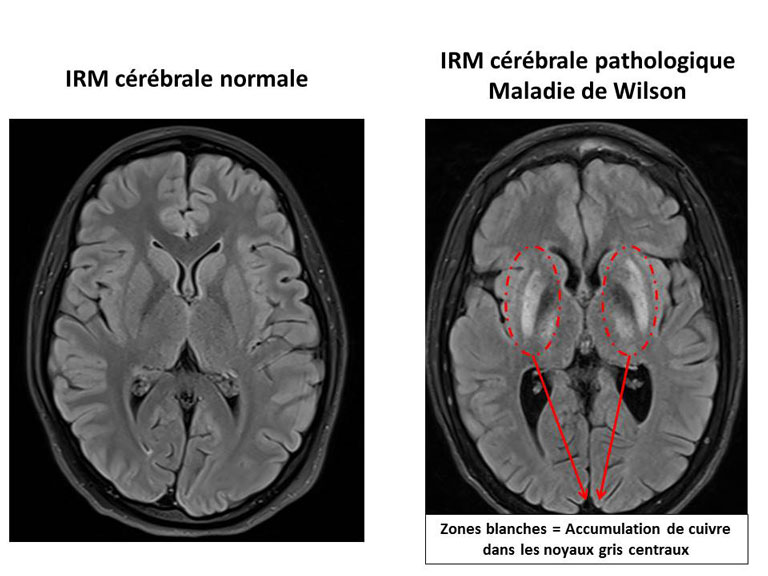 Examination of the eye is particularly important in Wilson’s disease. Indeed, at diagnosis 40% of patients and almost all those who have neurological symptoms have a pericorneal ring, greenish brown, golden, characteristic, the Kayser-Fleischer ring. This ring, exceptionally visible to the naked eye, must be sought in ophthalmology, by a specific examination completely painless, with the slit lamp. This ring does not affect visual acuity. 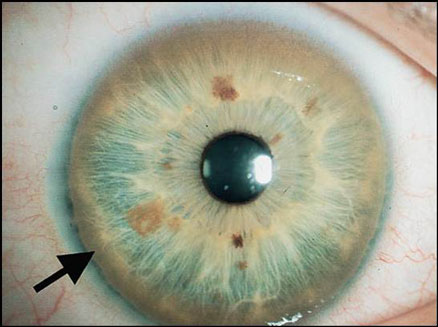 The Kayser-Fleischer ring disappears under treatment, first on the sides, then down, and finally up. It can take several years.

In women, the periods can be irregular. This may be the first symptom. Prior to diagnosis, miscarriages are also common.

Some patients may have kidney malfunctions. Urinary or biliary calculi (lithiases) are common.

Patients with severe form of Wilson’s disease that have led to prolonged bed rest can develop bone disorders.